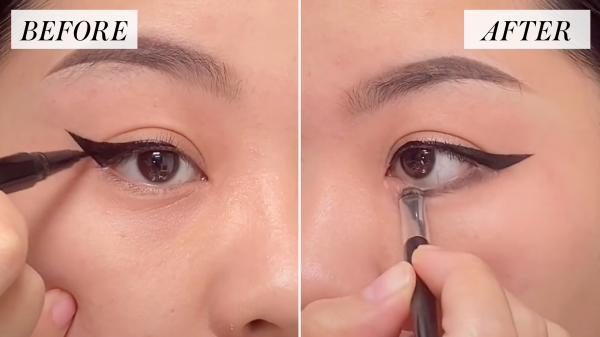 Folks with hooded and monolid eyes are rejoicing over a new winged eyeliner hack that is all over TikTok, and with good reason. Drawing that coveted cat eye oftentimes poses a challenge for those who have limited eyelid space because the wings have a tendency to hide inside the upper creases. With TikTok user Joni Sann's video, however, people with monolids or hooded eyes now have a simple solution to creating that perfect winged eye — one that might be even easier than the famous "bat wing" trick.

Sann's video, which she posted on September 21, currently has over 4 million views. She tells Allure that she came up with the method back in high school after struggling to find YouTube tutorials specifically for "hooded, almond-shaped eyes, or other tapered eye shapes with deep-set creases."

As Sann explains in the video, she used to begin by drawing the wing directly from the outer corner of her eye. Instead, she now "extends the corner of her eye [first] before drawing in [her] wing," meaning that she creates a downward-sloping line at the outer end of her eyelid that extends slightly beyond the end of her eye crease. Then comes the wing. She goes on to explain that she draws the wing "out and up, instead of… you know, vertical."

Her eyeliner tricks don't end there. If you're into lining your inner corners, Sann has a hack for that as well. Rather than drawing a horizontal line, she creates a diagonal line, which she says aligns with "the natural angle of [her] inner corner."

TikTok user Momo has also taken a liking to Sann's eyeliner hack. She documented her experience  with a video accompanied by the caption, "THIS IS WHY MY EYELINER NEVER SUITED MY EYES," indicating that she's now found a technique that suits her self-described "mildly hooded, downturned, almond-shaped eyes."

Momo says she's always watching eyeliner videos, which is why she thinks TikTok brought Sann's video to her attention. "I struggled a lot with eyeliner making my eyes look strange and misshapen, and I think this method really helps accentuate the features that are already there because it follows the natural line of the upper lid," she explains. She adds that she now only uses Sann's technique when lining her eyes.

New York City-based makeup artist Tommy tells Allure that extending the line further out isn't necessarily what's making this look work for hooded and monolid eye shapes. It's the fact that "the eyeliner is more horizontal than it is at an angle" and is placed at a "lower angle" than what a rounded eyeliner technique seems to call for. He's all for lining the eye beyond the natural lash line, but he says to "be wary of starting the wing at the corner or bottom lash line up." Placing the wing in these positions "lower[s] the eyeliner."  "A harmonious winged eyeliner will meet the top eyelid and no lower, thus lifting one's eyes and face."

Makeup has no rules, but if you have hooded or monolid eyes and are looking to change how you line them, then consider taking some pointers from this TikTok hack and aim the wings in a different direction.